Why Does Turning Lights Out Help Birds?

Less artificial light at night can help keep our feathered-friends safe and on course! The growth of dense, urban areas along ancient bird migration routes poses a significant and often fatal threat to migrating birds.

Many species of birds, especially the small insect-eaters, migrate at night. Night-migrating birds use the age-old and constant patterns of light from the moon, the stars, and from the setting sun as navigational tools to follow their migration route. Click here to see which bird species are shown on the migration map.

Artificial, city lights interfere with this instinctive behavior and draw night-migrating birds toward brightly-lit buildings in urban areas. Researchers have used radar imagery to determine how birds respond to lit environments. The observations found that once they fly through a lit environment they’ll return to that lit source and then hesitate to leave it. As humans, we can relate to this by recalling trips away from the city. Have you ever gone camping, or visited a cottage, and observed the splendor of countless bright stars in a black sky? We cannot see all of these stars at home because of the city lights.

The danger of artificial light to migrating birds is intensified on foggy or rainy nights, when the weather further obscures the night sky, or when cloud cover is low and the birds naturally migrate at lower altitudes. Disoriented, the birds are pulled off course and into an unfamiliar maze of lighted buildings. In trying to follow their instincts, they often collide with the windows or walls of the buildings, or even with other disoriented birds.

Floodlights and bright decorative architectural lighting can be hazardous too. The birds get trapped inside the beams of light and are reluctant to fly back out into the dark. They continue to circle inside the beams until they drop to the ground from exhaustion. Once on the ground, the stunned or injured birds become vulnerable to predation. 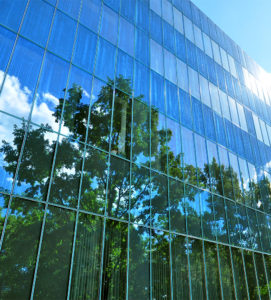 Early morning and daytime collisions often occur when migrating birds land in the city after being drawn toward the light during the night. Birds cannot see glass, they see a reflection of their habitat (trees, bushes, water, sky). They wake up ready to forage for food and water to fuel up for the next leg of their journey and find themselves lost in a maze of reflective windows and shiny exteriors. Deceived by the reflection, and unable to detect the presence of glass or mirrored exteriors as solid objects, birds often collide head-on with the windows and buildings themselves. Many migratory birds die on impact or sustain serious injuries that prevent them from continuing their journey. Stunned birds fall to the ground and become vulnerable to predation.

Migratory birds can also collide with the clear glass on structures like greenhouses, solariums, bus shelters, skywalks between buildings, or with windows that meet at the corners on homes or workplaces. They see through these glass structures to the trees or bushes on the other side and strike the glass in an attempt to find refuge. The same will occur when they see interior, ornamental trees and plants in glass-walled lobbies or through the windows on our homes.